The importance of being an organ donor was never brought closer to home when we learned that a good friend of the team at SABA; John Healy needs a heart transplant. 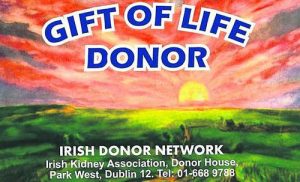 John is assisting the Irish Kidney Association which is the charity that promotes organ donation to the public on behalf of all people waiting for transplants in Ireland. Their national “Organ Donor Awareness Week” this year takes place between the 2nd and 9th of April. Organ donor cards will be available at the reception in SABA from today.

Unfortunately, organ donations have fallen dramatically in the last few years. This week highlights the importance of carrying a donor card. Even more importantly it highlights the need to have “that” conversation with your family and loved ones.

John Healy, best known for serving other people their dinner on RTE’s The Restaurant, had a very special meal served up to him this week. #

“A fundraiser in fashionable Pichet, attended by Dublin’s top restaurateurs was held for the country’s favourite maitre’d’, as he comes to terms with life on the transplant waiting list. John, after two massive heart attacks, needs someone else’s heart now and until he gets it, if he gets it, he remains seriously ill. He’s one of 15 waiting for a heart while 650 others are awaiting other organs, and neither celebrity nor money makes a whit of difference. Organ donations, despite our fantastic technology, top surgeons and hospitals, are falling faster than ever — and 2010 posted the largest decline on record. Consent – Some 31 patients like John died waiting on transplants. Of the 28,000 or so people who died, just 58 had donated their organs. In Spain — with a population ten times ours — not a single person on a transplant list died in 2010. Spain has ‘presumed consent’ — that is, organs are harvested from a deceased person unless they or their family “opt out” by signing a register. That is the opposite to the case here where you have to ‘opt in’ by carrying an organ donor card. In a EU-wide survey last year, 80pc of people said they were in favour of carrying a card, but in reality, only 12pc do. The Government says it will introduce an opt-in system. So did the last government. We’ll wait and see, but will it make any difference? In Spain, the evidence seems incontrovertible. However, the rate of organ donation didn’t actually increase at all when the legislation was first brought in. What actually made the numbers rise was the hiring of a dedicated team of specialists in hospitals who ask every single relative for the organs or their loved ones. They have to. It is that, not the presumed consent law, which makes all the difference. Mark Murphy, head of the Irish Kidney Association says Irish families are simply not being approached in our hospitals. Nephrologist John Holian agrees. The problem lies not with the well-intentioned public, but his own profession, he says. Reluctant –  Prof Jim Egan has recently been appointed by the HSE to sort this out. I hope he’ll start with by asking doctors why they are reluctant to ask for donations. Yes, they’re busy. Yes, talking to a grieving family about this is difficult. Perhaps it’s the case that everyone is ‘for’ organ donation in principle, but not when it’s their husband, wife or child being cut up. But why don’t we examine the issues and ask doctors and nurses what it is they’re afraid of? We have the lowest rate of lung transplants in Europe but the highest rate in the world of cystic fibrosis — and many sufferers die before ever getting a new lung. Presumed consent may well be the way to go, but not on its own. It is simply not enough, and it’s an emotional and political football. This is Organ Donor Awareness Week. Make yourself aware — not just of what you want to happen for you, but for your nearest and dearest too, if you’re ever asked.”